In response to our strapline "Craft Says Something" we ask professionals working in different fields of craft to write a piece on what craft says to them.

We are always looking to commission new features and pay for them. If you would like to write something for this new section on our website then do get in touch with your outline to ann-marie@greatnorthernevents.co.uk.

Natalie Melton joined the Crafts Council as Creative Director in January 2019 and has spent more than a decade working in craft.  From 2012- 2018 she was co-Founder and Managing Director of The New Craftsmen, which curates, commissions and sells unique contemporary objects rooted in craftsmanship and narrative and made by makers from across the British Isles.  As Commercial Director at Arts & Business (2005-2011), she oversaw the development of Crafted, a business support & mentoring programme for highly skilled makers.

Recently, in the space of a week I was asked to participate in two craft-focused events – one at Tate Modern – arguably the most important contemporary art institution in the world, and one at Hauser and Wirth, arguably the most powerful private network of contemporary art venues.  Both events were concerned with craft and making. Coincidence?  Or a sign of the ever-growing importance of craft in our lives?

For those who are well-versed in the language of craft then its value is generally indisputable. The application of head, heart and hands is a heady combination that instils patience, haptic development and application of skill, understanding of materiality, manual dexterity and much more.  A recognition of crafts’ value beyond its own community of passionate enthusiasts is, perhaps, one that has been long overdue, and it has been thrilling to see how the market and audience for craft has shifted ever broader over the last decade.

Organisations such as GNCCF have played a vitally important role in enabling this broadening of the market – creating high-quality events where the interested public can connect with makers and their work in a stimulating and fun environment.  It’s a vital part of the craft ecology that we work hard at the Crafts Council to support, promote and help grow.  The growth in the number of fairs over the last couple of years suggests that there is a growing demand from the public to connect with craft in a very human way.

And as the audience for craft grows and people are increasingly interested in learning about and understanding provenance and process, then it strikes me that crafts’ own voice and confidence is growing in response to this interest.  Whilst makers have always been critically engaged in bigger societal issues, right now it feels as though some of the most exciting alternative visions for the future – and most specifically around environmental concerns, are being generated by them. Their restless curiosity and material knowledge are generating all sorts of radical and exciting ideas about how we can make better use of increasingly scarce resources.

Some of these concerns are already generating exciting new and desirable products & processes.  Fernando Laposse works with farmers in Mexico to develop Totomoxtle, a decorative wood-like veneer made from the husks of heritage Mexican corn.  It’s a reaction to the introduction of high-yield genetically modified corn that was introduced by the US, and a way of encouraging local farmers to plant their own indigenous varieties of corn through a secondary income stream from the waste product.  The result is a richly textured material that can be used as a veneer for panels and furniture. 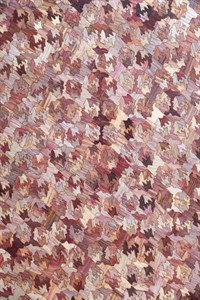 Others are even more radical in their approach.  The June 2019  issue of Crafts magazine featured an extended article on how makers are using food waste to refashion and make new products, or create powerful provocations that challenge the status quo on consumption and waste. Take Blood Relate by Basse Stittgen, who used blood leftover from the meat industry to create a collection of small objects. 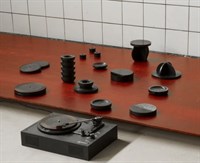 "The idea to have objects made out of blood is therefore much more repelling than the idea to eat animal meat, wear animal skin and even put stuffed animals as decoration up on a wall. This aversion comes not only from disgust but also from habit and tradition."

We might not yet be ready to purchase Xmas gifts made from waste animal blood, but this material innovation is a brilliant reminder of the skill and ingenuity of craft. For the vast majority of us our initial connection to craft is often driven through a haptic response – the way something looks and feels to us. But I would encourage all of us with an interest in craft to dig deeper to understand the motivations and interests of the makers.  With what feels like a growing number of makers actively engaging in exploring new solutions to pressing challenges, then conversations about objects are rarely just that. Rather they are a dialogue about the world that we live in, our impact on it,  and what we can do to ensure that we are leaving a positive legacy for future generations.