Hugh Macdonald was the curator of the inaugural Harewood Biennial, "Useful/Beautiful: Why Craft Matters", at Harewood House in Yorkshire.

This exhibtion aimed to challenge preconceptions, spark interest and inspire debate about the role craft can play in culture, identity and society.  Its curation crossed generations and disciplines, mixing classic and contemporary against the unique backdrop of Harewood House.

In this specially commissioned essay for "Craft says Something", Hugo reflects on the curation of this exhibition and how the craft he chose spoke to the visitors.

I had the great fortune in 2019 of curating the inaugural craft biennial at Harewood House in Yorkshire. Our mission was to showcase the work of a broad and diverse range of British craftspeople in rooms throughout the historic country house and, in the process, to help visitors appreciate the extraordinary level of historic craftsmanship that exists in the interior of Harewood itself. Introducing “new” (or alien) pieces to the rooms helped spark conversations not just about the exhibits, but about the rooms themselves, and the house as a whole. Could contemporary craft ignite a conversation about the role of the country house today? 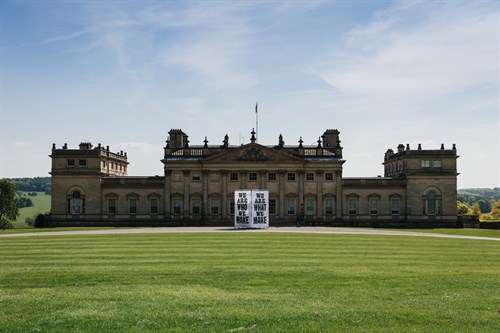 Above: Harewood House, West Yorkshire, with Anthony Burrill’s commissioned work for Useful/Beautiful: “WHO, WHAT, WHERE, WHEN”.

Harewood is a “treasure house” – an exquisite example of late 18th century architecture by John Carr, with ceilings by Robert Adam, a large Thomas Chippendale furniture collection, commissioned for the house, and a significant art collection that spans the Renaissance to 18th Century English portraiture to standout 20th and 21st century pieces, too. The grounds in which Harewood sits were sculpted by Capability Brown. In short, Harewood is a fairly spectacular example of British craftsmanship from several eras, from several hands. 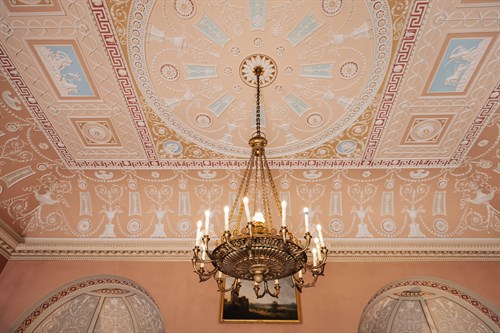 Above: Ceiling by Robert Adam in The Main Library.

Yet one of the aspects that I found fascinating in the months I spent familiarising myself with the house before developing a concept for the exhibition, was how visitors would respond as they walked through it. A lot of people said “wow”, many remarked on the wealth and opulence, and of course almost everyone took pictures. It seemed that very few people emotionally engaged with the house which, until very recently, was still the home of the Lascelles family. This relatively passive response stayed with me as we pieced together the exhibition, and in time, what drove my curation was a desire, not just to showcase fine examples of contemporary craft, but to go further. As an extraordinary exhibition platform, Harewood’s hallowed rooms deserved more discussion than selfies.

And so we set about gathering 26 exhibits and four special commissions with an extended mission to challenge people, to entertain, to surprise, to mystify and to help people to think. Our exhibition was called “Useful/Beautiful: Why Craft Matters”, and we were determined to make visitors to Harewood engage with it, whether they liked it or not. We wanted to push people’s understanding of what craft can be and why it is important in society today. In the case of every exhibit, we asked the craftsperson to answer the simple question: “Why does craft matter to you, today?”. It felt important that they express what motivates them, rather than me or anyone else speaking on their behalf. 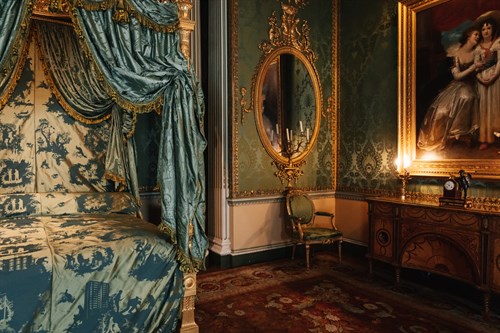 Our exhibits were strikingly diverse, in scale, material, form and value – from precious glass totems to boiled leather vases, hand bound books to wicker baskets to paper sculptures to couture fashion. We showed one exhibit in each room, using the function of the room as a connecting point to the exhibits on show: so we displayed a dress in Princess Mary’s dressing room; a book in the library; knives in the kitchen; umbrellas in the hallway. Regardless of material, scale, age or experience, craft matters today to each of these makers and studios for the same broad principles. Craft connects people to each other, to the past, to materials, to skills and to objects we use and love. Craft promotes and practises responsibility, repair, respect and resilience. It is a form of knowledge and an attitude to life, and not only a finished product. Craft says all these things, and more. 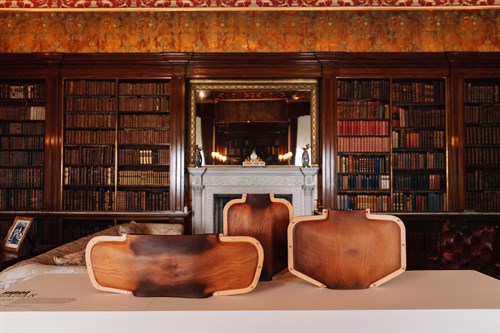 Above: “Winged Vases” by Simon Hasan in The Spanish Library

We included mesmerising, ethereal glasswork by Whitby glass artist Effie Burns, cast from vegetables to resemble miniature fantasy landscapes. We showed pairs of jeans, by Hiut Denim from Cardigan, Wales. We took over the entire length of The Gallery with industrial shelving, on which Faye Toogood transported an archive of her studio’s work, each piece made in collaboration with different craftspeople around the UK. In the kitchens below stairs we showed Netherton Foundry’s beautifully functional iron cookware from Shropshire. In the Garden Room we showed Leszek Sikon’s garden tools, forged from recovered ammunition. In the Music Room we showed Freed ballet pointe shoes, which have been made the same way, by hand since the company’s founding 150 years ago. A team of skilled craftsmen and women make some 30,000 pairs a year today and they are the most sought after ballet slippers in the world. 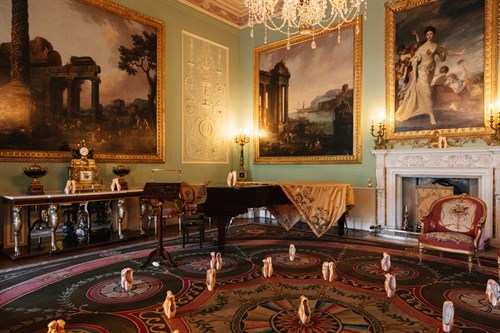 Above: Freed pointe shoes in The Music Room.

The exhibition was in places charming, in places clashing, in places controversial. Precisely as we’d intended. The house team received vehement complaints that installations were getting in the way of the house and its interiors. Umbridge was taken by some with regards to the selection of exhibits – that they didn’t have a place in an exhibition about craft, and that they didn’t belong in a house like Harewood. For the most part - I’m happy to say – people were curious, surprised, and delighted sometimes, even. For me the relief was that people actively and passionately responded to even consider what might “belong” in Harewood, and what might not. Craft spoke to visitors (in some cases it shouted), and woke them up to pause, think and care about their experience in the house itself. Harewood felt very alive.

We are in danger of smothering our country houses with precious kid gloves in the UK. We can be too reverential to interrogate how they might be entertaining to generations who would rather be looking down at their phones than up at an Adam ceiling. Craft from the past deserves similarly active attention, interrogation and appreciation as craft of our present times. Harewood might have been the platform for the exhibition, but it was also the star of the show.